Snow Dance of the Intrepid

I don’t believe in driving my car through a blizzard—I would have made the trip to my daughters’ university and back by now were it otherwise—but I’m not opposed to stepping outside to brave a snow storm on my own two feet. Granted, those feet won’t stray too far from my front doorstep.

There is a granddaddy of a winter storm howling outside as I type this post, nature’s way of reminding us that this is January in Central Ontario, folks. Don’t be drawn in by all that balmy warm weather you’ve been enjoying these past few weeks. Why only a few hours ago I could see grass in my front yard. Grass!

Now the front walkway has disappeared under snow drifts, lost in a great white oneness with the rest of the yard. In the glow of the streetlights, the snow sweeps sideways with a roar so ferocious that it might be direct from the Arctic, carried in on a jet-engine wind, relentless and fiercely revving. Out the side windows, I see the boughs of the pine trees thrashing about so mercilessly you’d swear they were shrieking “Uncle! We give up! Stop this craziness!” I wonder whether there will be broken branches on the ground tomorrow morning, granted the pines tend to fare better than the brittle old maples lining the road.

And how about me? I am inclined to pull on my snow pants, my ski jacket, face warmer and toque. Maybe I’ll add so ski goggles (I’ve seen my neighbour, Sue, do just this, so adamant she is in persisting in her daily walks, come hell or high weather). I’ll pull on my daughter’s massive snow boots with their fur-lined tops, and I’ll venture out into the storm. Why?

For one, it is easier to shovel the snow is small batches. If I let it build up, it will be twice as hard on me tomorrow.

For two, I want to see what it feels like to stand in the midst of Mother Nature’s winter fury. It reminds me of a time when I was twelve, and my family lived in a raised bungalow on Fittons Road hill. It was pouring rain out, heaving rain, one those momentous downpours that comes so hard and so heavy that you are soaked through to the skin in ten seconds flat. I pulled on my bathing suit, with short shorts and a t-shirt over top, and then dashed into the back yard in my bare feet, raising my face and hands up toward the sky, eyes blinking against the raindrops. It was amazing. It was joyous.

A few minutes into my impromptu rain dance, I glanced around and there, five backyards away, I saw my best friend’s older brother. He was standing in his back driveway staring at me. And just like that, the ground went out from under my feet and all the joy drained away like rainwater in a sewer, rushing away in a torrent. I dropped my arms, and my head, and scuttled back into the house, embarrassed, face burning with inexpressible shame. I wish I could find the girl I was back then, curl my arm around her shoulder and say “hey, it’s all right. Matt is an asshole anyway.” Though in fairness, I don’t think he ever said anything about it.

I was more self-conscious back then. Now that I’m almost fifty, I don’t give a rat’s ass.

Whoa! The power just blinked off. The wind is howling more scarily than ever. Up to 70 km/hour according to the last weather report. I open the front door and am met with its steady, screaming thrum. The streetlights are out now and the yard outside my door has fallen into darkness, the light coming from the pink-grey stormy evening sky

I may be intrepid, but I’m not that intrepid. Think I’ll wait ’til the power comes back on… and then I swear, I swear, I will dance a Mighty Blizzard Dance, and drop on my back to make snow angels.

Post-script: In case you didn’t believe me, here’s proof (sorry for the quality. I never claimed to be a photographer): 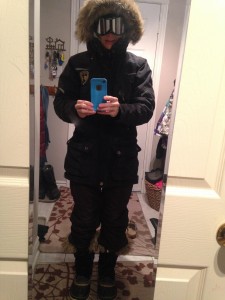 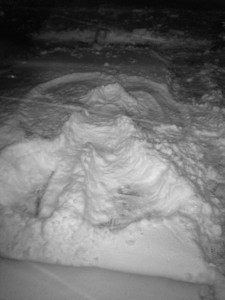 And, as it turned out, that storm was a lot scarier viewed from the inside than it was standing in the midst of it outside – hmmm, a Living Uncomfortably lesson?