I climbed a tree today. Right square in the middle of January. Here’s the view: 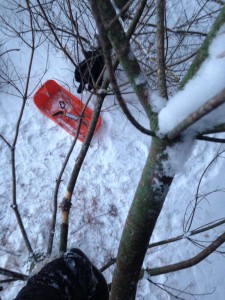 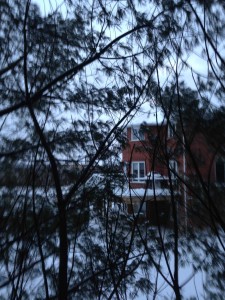 Now, you might think that this would qualify as a suitable activity for the Living Uncomfortably challenge, but in fact, I found the opposite to be true. I love to climb. I have always loved to climb. When I was a kid, we had a big weeping willow tree in the backyard that was perfect for climbing. I spent many happy hours scaling its limbs… right up until the day I clambered up so quickly that I climbed right into a wriggling, squirming mass of tent caterpillars. That put me off for a little while, but only a little while.

Years later, my eventually-to-be-husband and I had an argument and he’d unceremoniously dumped me from his sailing crew—or perhaps I jumped ship. I can’t remember. So, instead of going to the regatta, what did I do? I found one-day a rock climbing course on the Niagara Escarpment. It was glorious! The only mistake I made was in not going back to climb again—and again—in the weeks and years that followed. I waited. Twenty years. And then it finally occurred to me: You know, maybe it’s okay to follow my dreams for a change? To do what I’m interested in doing instead of looking after everyone else? To hell with water sports, give me a climbing rope and some carabiners, please.

And so it came to be that this past summer I spent several hours every week Tree Top Trekking, and later on, rock climbing here, here and here. Finally! I’m home again!

Until winter came and I was grounded.

Today, though, I wasn’t having any of it. After several butt-numbing hours working at my desk, I pulled on my snow gear and headed out to the garage. I gathered up my tree-trimming tools—loppers, clippers and a hacksaw—trod a fresh path through the snow into the forest, and set up shop beside a tree that I’ve been eying for a while, one with a massive dead branch split off about twelve feet up. The branch is held up precariously by a web of neighbouring limbs. “I’m going to get that beast down before it falls and clops someone on the head,” I thought. Not that it is the least bit likely to happen. It just gave me an excuse to clear a ladder of limbs up the side of the tree so I could get my feet off the ground.

Just about my favourite place to be.

Living uncomfortably? Doing what you loved as a kid? That’s not uncomfortable at all. No way. I feel right at home up here.